Computers – and the technologies we’ve built with them – have opened up huge new realms of possibility. AI provided us new ways to express ourselves. It is transforming our ability to create. While many are exploring possibilities of art through new technologies, some artists are defining the genre for computational creativity. Below you can find 10 iconic artists and my favorite works of them in no specific order.

What do we see when we look?

Memo Akten works with emerging technologies as both a medium and subject matter, investigating their impact on society and culture – with a specific interest in the collisions between nature, science, technology, ethics, ritual and religion.

The Istanbul-born, London-based artist delves into the world of machines that learn and machines that think; he explores different concepts including perception, cognition, bias, prejudice, social and political polarization.

An artificial neural network looks out onto the world, trying to make sense of what it’s seeing, in context of what it’s seen before. But it can only see through the filter of what it already knows, just like us. Because we too, see things not as they are, but as we are. The work is part of a broader line of inquiry about self-affirming cognitive biases, our inability to see the world from others’ point of view, and the resulting social polarization.

How to connect with people despite the polarization of digital world?

Mike Tyka’s artistic work has focused both on traditional sculpture and modern technology, such as 3D printing and artificial neural networks. As a PhD holder in Biophysics, he made sculptures of protein molecules that reflect exact molecular coordinates of each biomolecule. He is also a researcher at Google and he co-founded the Artists and Machine Intelligence program at Google.

The piece examines our new world which we created, a digital attention economy, in which we’re constantly distracted, digitally connected and yet yearning for human connection. Trained on 200.000 tweets from accounts identified as bots after the 2016 US presidential election, this piece features 20 machine-learning-driven printers which endlessly spew AI-generated political tweets by imaginary, generated people. Printers are continuously printing AI generated tweets at a slow but steady pace, letting this sculpture evolve and change every day. The descending curtain of printer paper creates a central space with two chairs, inviting two people to sit, converse and connect, despite the torrent of machine-generated political propaganda that surrounds them.

What will be the role of humans in a future AI driven world?

Lauren is an artist based in USA whose work examines how issues of surveillance, automation, and network culture affect our social relationships. Her work explores current social and technological systems and structures for being a person and interacting with other people. As algorithms begin to optimize nearly every interaction and aspect of our lives, the last remaining role for people may be performing the emotional labor to act as human interface to AI.

The 24h HOST performance is a small party that lasts for 24 hours, driven by software that automates the event, embodied in human HOST. Upon entering the 24h HOST party, an AI system analyzes each guest, and determines the proper drink, series of introductions, and conversation points to keep them engaged. Directions and talking points are communicated to the human host via an earpiece, and she delivers them with a human touch. We may seek the efficiency and optimization of algorithms, but we will still desire the emotional experience of interacting with humans.

How one can visualize the relationships in data?

Mario is an artist and a skeptic with a curious mind. His preferred tools are neural networks, code and algorithms. His interests involve AI, deep learning, generative and evolutionary art, glitch art, data classification and visualization. He has a deep interest in human perception and aesthetic theory.

This map offers an alternative way to browse the nearly 2.7 images contained in the Internet Archive’s book collection. It shows 5500 different subjects which have been algorithmically arranged by their thematic relationships. The size of each link resembles the amount of images that are available for that topic. Clicking on a link will open the flickr page containing all the pictures for that subject. Rolling over a link will highlight all the topics that have a direct link with the subject.

The relationship data for this map has been generated by first retrieving all the tags of the Internet Archive’s images on flickr and then connecting those subjects which appear together on an image. The resulting similarity matrix has been processed using the t-Distributed Stochastic Neighbor Embedding (t-SNE) technique which groups topics by the strength of their relationship.

Refik Anadol is a media artist and director from Istanbul whose large-scale and interactive AI projects have inspired audiences worldwide. He is working in the fields of site-specific public art and live audio/visual performance with immersive installation approach. His works explore the space among digital and physical entities by creating a hybrid relationship between architecture and media arts with machine intelligence.

To celebrate the 100. anniversary of Los Angeles Philharmonic, he and his team developed a unique machine intelligence approach to the LA Phil digital archives. Orchestra’s digital archives have nearly 45 terabytes of data: 587,763 image files, 1,880 video files, and 17,773 audio files. To make Walt Disney Concert Hall “dream,” Anadol utilized a creative, computerized “mind” to mimic how humans dream – by processing memories to form a new combination of images and ideas. The result is a radical visualization of the organization’s first century and an exploration of synergies between art and technology, and architecture and institutional memory.

Do people collaborate with machines or machines are just tools?

Sougwen Chung is a former research fellow at MIT’s Media Lab and a pioneer in the field of human-machine collaboration. She uses both her own hand and robots to “address the closeness between person-to-person and person-to-machine communication.” Her works explore the dynamics of humans and systems.

This piece is an initial exploration into the machine learning the drawing style of the artists hand. In a sense, the robotic arm has learned from the visual style of the artists previous drawings and outputs a machine interpretation during the human / robot drawing duet.

As in this artwork, human-machine collaboration creates a place to explore the complicated and compelling question of authorship of an artwork. Through the creative work, we see that machines doesn’t have to be merely tools, they could be collaborators. It’s worth to question how can human and non-human collaboration expand our thinking about cooperation itself, and what it means to create collectively?

Can artists’ style live even after they are dead?

Gene Kogan is an artist, programmer and leading educator in the field of creative AI – who is developing the world’s first decentralized open-source autonomous artist. He is interested in generative systems, software for creativity and self-expression.

Is there a room for creativity in machine art or is it just rules?

Robbie Barrat is an artist working with artificial intelligence as a tool and a medium. He graduated high school in 2017. Since then he has worked at NVIDIA on the use of neural networks in self driving cars and at Stanford University to explore using machine learning for drug discovery.

Heavily inspired by the rule-based work of Sol LeWitt- Robbie Barrat used GPT-2, OpenAI’s language generation model, to generate text describing the rules of a drawing, which Barrat then interprets into a generative sketch. Robbie often compares his process of working with GANs to that of the artist Sol LeWitt who is famous for writing out “rule cards” or algorithms for humans to execute to create his drawings.

How to synthesize a word that sounds good?

Allison Parrish is a computer programmer, poet, educator and game designer who lives in Brooklyn. Her teaching and practice address the unusual phenomena that blossom when language and computers meet. She does research on and make art about language and how it’s used and arranged, especially in the context of computation and the Internet.

Compasses consists of poems produced with the help of a machine learning model that explores phonetic similarity. This model generates new imaginary words that exist in the negative phonetic spaces between the phonetic hidden states corresponding to names of members of well-known quartets (mercury, mars, venus, earth for this poem).

Can an AI model not only learn a dancer’s style, but create its very own artistically compelling choreography?

Wayne McGregor, CBE (Commander of the Order of the British Empire) is an award-winning British choreographer who uses AI to expand the possibilities of human movement. He is the Resident Choreographer of The Royal Ballet. Driven by a curiosity about movement and its creative potential, his experiments have led him into collaborative dialogue with an array of artistic forms, scientific disciplines, and technological interventions – including artificial intelligence.

McGregor collaborated with Google Arts & Culture to develop an artificial intelligence-powered tool that creates original dance movement. Creating an artificial intelligence system that could not only understand McGregor’s movement vocabulary but also create new choreography based on his style, was a two-year process. The tool generates original movement inspired by Wayne’s 25-year archive

The technology also learned the distinct way each of McGregor’s 10 company dancers moved. Cameras captured dancers’ solos, detecting the forms of their individual poses, and then it provided suggestions for the next choreographic sequences, displaying them — in the form of constellation-like stick-figure avatars — on a screen in real time.

I hope you enjoyed reading! I’d like to hear your favorite AI artist in the comments. If you liked my post, spread the love of AI art by sharing 🙂 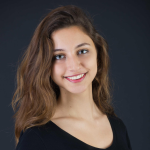 How About Getting To Know Software Projects?

How About Getting To Know Software Projects?
July 3, 2020

10 AI Artists Who Will Expand Your Horizon